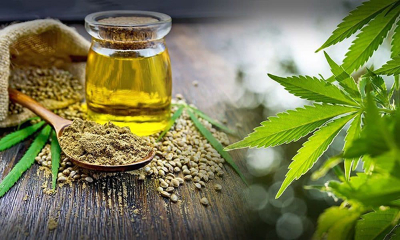 Since the beginning of this year I have been introduced to CBD products for both massage and oral intake.  I’m amazed at the results.

I am carrying CBD products by Color Up and will be using them in some of my services.  I’m starting with the massage oils and salves, the benefits are astounding!

I’m sure I’m one of many that have been wary about using any product with cannabis.  Whether it is because of drug testing or in my case, just not wanting the feeling of being high.

CBD is a different plant, the hemp plant.

Here are some commonly asked questions:

Will CBD get you high? – No!  CBD is non-psychoactive, unlike THC, this means there is not the associated “high“ that comes along with use of THC rich strains or products.

CBD will show up on a drug test?

To date, topical use has not been associated to a failed drug-test. It may be possible when hair follicle testing is used for the screen, however, typical fluid testing has not created a failure to our knowledge. Even ingesting pure CBD products will not be cause for a failed drug test. As far as research and experimentation have confirmed thus far, screenings test for THC and not CBD.

What is CBD and what is the the Endocannabinoid System?

The endogenous cannabinoid system,named after the plant that led to its discovery, is perhaps the most important physiologic system involved in establishing and maintaining human health. Endocannabinoids and their receptors are found throughout the body: in the brain, organs, connective tissues, glands, and immune cells. In each tissue, the cannabinoid system performs different tasks, but the goal is always the same: homeostasis, the maintenance of a stable internal environment despite fluctuations in the external environment.

Endocannabinoids and cannabinoids are also found at the intersection of the body’s various systems, allowing communication and coordination between different cell types. At the site of an injury, for example, cannabinoids can be found decreasing there lease of activators and sensitizers from the injured tissue, stabilizing the nerve cell to prevent excessive firing, and calming nearby immune cells to prevent release of pro-inflammatory substances. Three different mechanisms of action on three different cell types for a single purpose: minimize the pain and damage caused by the injury.

The endocannabinoid system,with its complex actions in our immune system, nervous system, and all of the body’s organs, is literally a bridge between body and mind. By understanding this system we begin to see a mechanism that explains how states of consciousness can promote health or disease.

Accent Beauty
4.5
Based on 84 Reviews

Stephanie L.
2022-08-02 15:27:01
I am so happy I scheduled an appointment with Nora. She is so bubbly, sweet, and is really knowledgeable about skincare. I learned more about my skin from...

Jennifer W.
2022-06-13 18:36:11
I recently was back in Denver and was able to visit Nora again. I loved reconnecting with her and it was, once again, an amazing facial and massage.

Monique M.
2017-07-28 20:49:02
The best. What a blessing to have found Accent Beauty and Nora! She is an absolute gem with professionalism and unparalleled skills as an...